With the exception of the myths associated with the mighty reign of the island and the gold hair of Pterelaus that allowed him to be immortal, Kefallonia, since the 11th century B.C. has been occupied in turn by the Spartans, the Athenians, king Philip and Alexander the Great, the Aetolian league, the Romans, the Byzantines, the Vandals, the Ostrogoths, the pirates, the Normans, the Venetians, the Turks, the Russians, the French, the British, the Italians, the Germans, and by Louis de Bernieres.

De Bernières, of course, is the British novelist, author of the best-selling book Captain Corelli's Mandolin and adapted into film by John Madden in 2001, which fueled the sun-kissed island with high-octane.

Yet, this doesn’t mean that, even if De Bernières is a master of the written word and a gifted storyteller, either the book or the film felt loved by the locals. And this, not because of their notorious pride and stubbornness, idiosyncrasy which the Kefallinians brag about in every given opportunity, especially when tipsy from Robola, the island’s trademark white wine, by saying in their quasi-singing dialect: “Ποιος ολίγον ποιος πολύ όλοι είμεθα κουρλοί» - “One more one less, we’re all gone berserk”. No, a large part of the population was bewildered due to the ambiguous, alleged biased political views of the author, most of which were not included in the film in favor of its love story and by doing so, the history of Cephalonia was also lost; a tragi-comedy, with a predominant music theme which explores many varieties of love where "history ought to be made up of the stories of ordinary people only." From this viewpoint, it didn’t deliver to the max; after all, Kefallinians have a timeless tradition with these subjects. 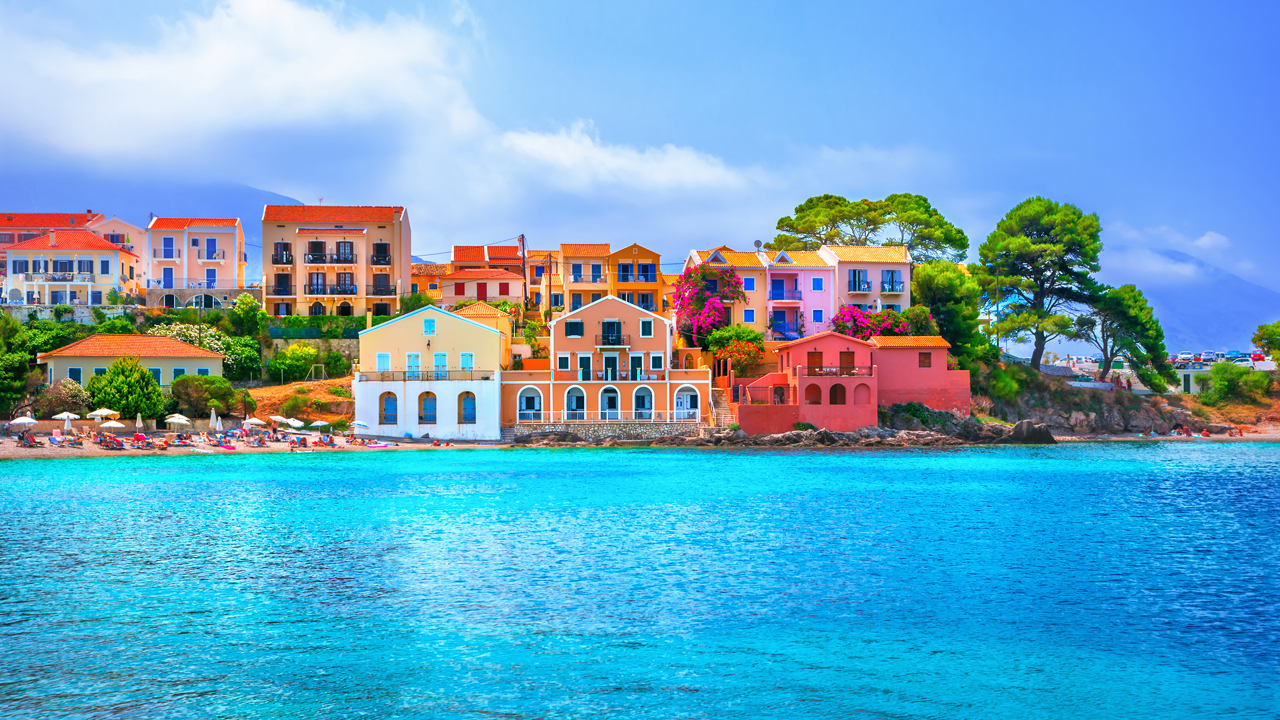 For starters, they were practicing the mandolin long before, at least two centuries, before Corelli picked it up: Music is an integral part of the rich cultural history, an amour propre for Argostolians, who conceived the “kantades”, ballads that is, sung by groups of men, the troubadours, while “arietta”, a solo singing tenor followed by the chorus, is Lixouri’s sui generis contribution to the musical synecdoche. Love, on the other hand, knew glory days, for example, when back in the 30s, the “War of the Fragrances”, or “Fragrant Eros” was at its peak on “Lithostrato”, the long cobbled promenade of Argostoli (the island’s capital); it was then and there that the Kefallinian temperament and flirtatious behavior reached its apotheosis, with the young sprinkling their objects of desire with perfume.

Nevertheless, nobody can argue that it was the film that put under-the-radar Kefallonia in the spotlight of hot tourist destinations.

That’s how the jet set discovered a new photogenic charm; Steven Spielberg, Tom Hanks, Bruce Springsteen, Al Gore have stopped by and everyone from John Galliano to Jon Bon Jovi and from Madonna to Armani and to Johnny Depp have jumped ashore to pamper themselves with seafood pasta and Robola in Fiskardo.

Wines, a tradition dating back to Homeric times, which proved to be a key factor to the island’s economic recovery in the 60’s with inspired winemakers such as Kalligas, Metaxas and Cosmetatos helping the island to heal its wounds after the Armageddon.

Fate, while on one hand can be strikingly generous and cook all the ingredients in the right place at the right time thereby creating something almost on the side of phenomenal, can also be a vicious mistress: one of the greatest punishments to ever befall on these nature-blessed grounds was the 7.3 Richter earthquake of 1953, which literally levelled almost every house on the island, located just east of a major tectonic fault.

Among the most, the village of Sami (where the film was shot) was also completely wrecked and the only areas that escaped destruction were on the northern side. So Fiskardo, today the famed honey trap of the “A” list and artists, was spared with its Venetian houses surviving no ill effects.

Assos, on the other hand was flattened but it was completely rebuilt by the French, offering today a real taste of traditional Greece, a showcase of the island’s stunning beauty, with the earthquake’s only positive reverberation being the revelation of the underground lake of the dazzling Melissani Cave.

Surely this kind of trauma can drive anyone nuts, but it is widely known in Greece that St Gerasimos, the island’s saint patron is a miracle worker for those gone potty.

Well, here’s how it goes today: the biggest of the Ionians is undoubtedly the most beautiful as well, from the point of view of unspoilt nature and certainly deserves more space that anybody gives her. A nesting ground for the loggerheads which hatch their eggs on the southern beaches in summer, and the Mediterranean Monk Seal, one of the rarest and most endangered mammals; a small national park, that of Mt Ainos, the highest in Eptanese, where deer and wild horses stray; wild flashing meadows, vineyards and hidden coves; fir trees, oleander, the sound of bells of wandering goats and impossibly blue beaches with milky-white sand. 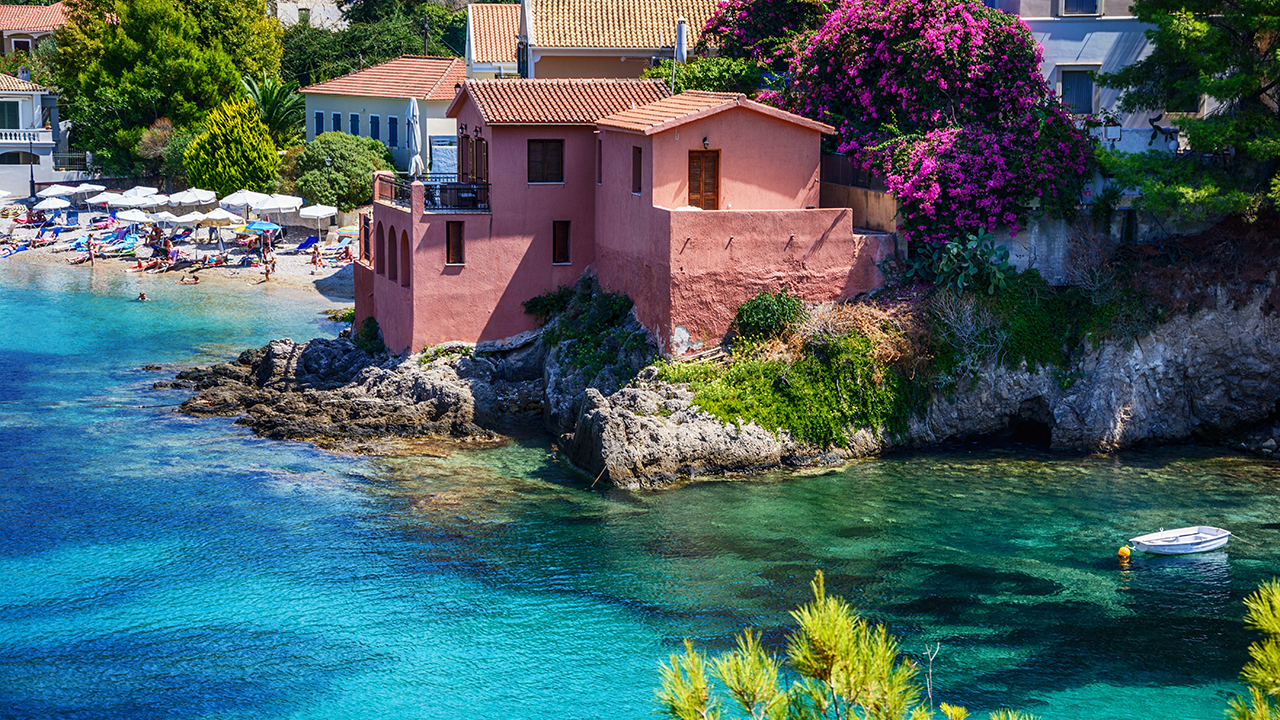 Kefallonia is the “Surf & Turf” of the Ionians, a happy pill that has to be swallowed slowly to be better understood. She is multilayered and wild; proud and magnificently complicated.

It’s due to her intellectual “noble” legacy probably: from Laskaratos and the seaman poet Kavadias to the genuinely Philhellenic British such as Napier, Durrell and Longford who are warmly remembered and commemorated in Kefallonia, ranking frequently among demi – gods. And above all, Lord Byron, but few know of his passage from Kefallonia. So if it happens to be at Kallithea, Lakythra, here’s the chance: while it would be a long shot to run across any tourists wearing 'Captain Corelli's' T-shirts, you’ll join many in locating the inscribed marble slab on “Byron’s Rock”, where the poet used to sit and write, with his very own words on it, in Greek: “If I am poet I owe it to the air of Greece”.